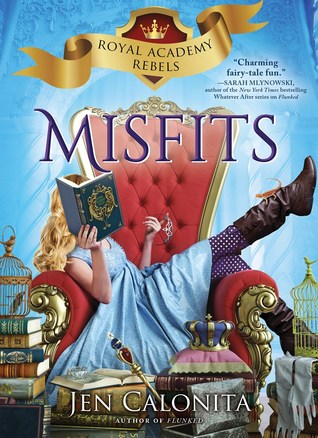 A brand new series from Jen Calonita, set in the world of Fairy Tale Reform School! Not everyone born royal is meant to rule…

In the magical fairytale kingdom of Enchantasia, becoming a legendary Prince or Princess doesn’t happen overnight. Enter Royal Academy, the training ground for the fairytale leaders of tomorrow!

But reluctant-future-princess and new-student Devin has some reservations about RA, especially when it comes to the Headmistress. Olivina seems obsessed with preparing students for possible villain attacks. But when Devin asks when they’re going to learn how to actually rule a kingdom, Olivina becomes enraged. Something isn’t right with this lady, and what Devin discovers could change the fairytale world forever…

I loved this story!

The characters in the story are new princes and princesses. Some are related to familiar princesses, such as Raina who is Snow White’s sister. Snow White, Cinderella, and Rapunzel graduated from the school years ago, but they still make appearances in the story.

Devin was a rebel, which didn’t go with Olivina’s vision for the school. Olivina is the fairy godmother who runs the school. However, everything is not what it seems at the school. People who you think should be good are actually connected with villains.

Though I haven’t read the Fairy Tale Reform School series, which comes before this book, I really enjoyed this story! I’m going to look for that series to see what happened to the original princesses.

Have you read Misfits? What did you think of it?