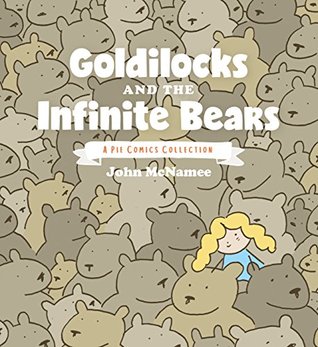 Pie Comics began as a college comic strip way back is the mid ’00s, when flip phones roamed the earth. But it wasn’t until a shoulder injury forced John to simplify his drawing style and improvise the comics instead of actually sitting down and writing them that Pie Comics became the beloved strip it is today! This collection showcases some of the funniest and most trenchant of Onion writer John McNamee’s online comic strips, found at piecomic.tumblr.com.

This is a hilarious collection of comics.

Each comic is about page long and has parodies of fairytales or popular characters. I loved them, and I laughed out loud many times. For example, Super Mario runs through tunnels, but he forgets that his actual job is to unclog drains. That makes fun of how the games have drifted so far from the original premise.

There were multiple stories from the story of Cinderella. In one, Cinderella goes to a pawn shop with her jewelry from the fairy godmother, and it turns into bugs after midnight. Another one makes fun of the fact that Prince Charming doesn’t actually know what her face looks like.

Though there are references to kids stories, it isn’t a collection for children. It is a laugh-out-loud collection of comics.

Have you read Goldilocks and the Infinite Bears? What did you think of it?