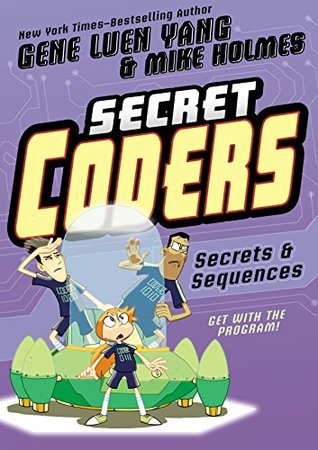 Stately Academy is no ordinary school: it was once home to an elite institute where teachers, students, and robots worked together to unravel the mysteries of coding. Hopper, Eni, and Josh won’t rest until they’ve learned the whole story, but they aren’t the only ones interested in the school’s past. Principal Dean is hot on their trail, demanding that the coders turn over their most powerful robot. Dean may be a creep, but he’s nothing compared to the guy who’s really in charge: a green-skinned coding genius named Professor One-Zero.

This series is great for kids. It teaches how to do simple coding, which I know a lot of kids are interested in these days. Since they like using technology, it’s great to teach them how to create it.

The plot of this story was very good too. The story is developing more with each book. This story included an evil villain who they had to stop from destroying their town. However, while the bad guy was trapping him in his dungeon, he stopped to teach them some more coding tricks. I know villains in stories often stop to explain things while they should be running away, but I’ve never seen one stop to teach kids, so that was very weird.

One thing that would greatly improve this series is if there was some kind of refresher at the beginning of the story which summarized the previous books. There was a gap between the time I read them, so it would have been nice if there was a page or two to remind me of what happened before. This would be helpful for kids who take the books out of the library and can’t flip through the previous book before moving on.

However, this is a great series for kids!

Here are my reviews for the other books in the series: Secret Coders, Paths and Portals

Have you read Secrets and Sequences? What did you think of it?

One thought on “Review: Secrets and Sequences (Secret Coders #3)”