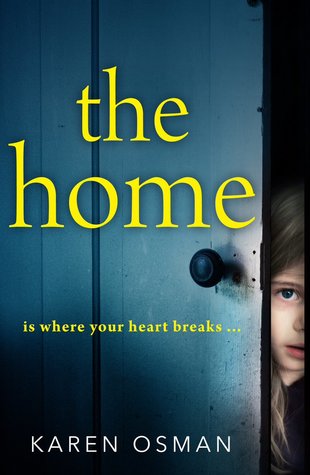 Angela was just a baby when her mum left her for the last time, and a children’s home is no place to grow up. The home’s manager Ray takes the girls off to his ‘den’ in the garden and the littlies come back crying, and Ray’s wife Kath has special wooden spoons which she saves for beating any of the children who dare to misbehave.

So, when wealthy couple James and Rosemary come to choose a child to adopt, Angela is desperate to escape. But the scars of her childhood remain, and when Angela’s search for her birth mother Evelyn is successful, their reunion is no fairy tale. Soon strange and sinister events start to unfold, and Evelyn fears she may not survive her daughter’s return…

The Home is another devastating psychological thriller from the author of the bestselling The Good Mother.

Today is my birthday – I am nine years old. Nelly gave me her favourite marble as a present. It’s yellow like a daffodil and the only thing I own, apart from this diary. I need to hide it otherwise Peter might steal it. He has a huge collection, which he says he won in bets but everyone knows he steals. Apparently, he keeps his loot under his bed. We don’t get birthday presents but when I got back from school for tea Fat Franny gave me the biggest piece of chicken. When she’s not clipping me round the ear, she’s all right really. Better than Nasty Nora anyway – she didn’t even say Happy Birthday.

Yesterday, we had to make Valentine’s Day cards at school. When Snapper asked who I was going to give it to, I said Nelly and everyone laughed and Peter started chanting lesbian! lesbian!at the top of his voice and the whole class joined in. Mrs Thistlethwaite had to snap her ruler on the desk so hard it broke. Nelly said to ignore them. Peter is going to be so sorry.

After school, me and Nelly went ice-skating on the lake in the park. We don’t have skates, we just slide on our feet. I saw Peter and his mates skating as well. As soon as I got close to him I pushed him and he went flying head first onto the ice. It was so funny! I couldn’t stop laughing but Nelly said I pushed him too hard and he could have really hurt himself. His friends had to pick him up off the ice and when he stood up he had blood on his forehead. Nelly said she doesn’t want to be friends with a bully. I don’t care – I bet he won’t call me a lesbian in front of the whole class again.

A horrid day – Nelly wasn’t talking to me and Peter had to stay home. When I got back after school, Nasty Nora was waiting for me. I knew I was in trouble. Somehow she must have found out what I did to Peter. Maybe Nelly told her. As soon as I got through the door, Nasty Nora grabbed me by the hair and dragged me into her office. She didn’t even ask me what had happened, just gave me the strap. I didn’t cry but that seemed to make her even angrier as she gave me a few extra welts. Luckily, there was a knock on the door and Nelly told Nasty Nora she was needed immediately as there was a fire in the kitchen. Nasty Nora ran out and Nelly after her. I was in so much pain I had to force myself to walk to the kitchen. There was a small fire in the sink. Later, Nelly told me that she had stolen Peter’s lighter from under his bed. I think Nelly’s my friend again – it’s not easy to get in the boys’ dorm – she must have stolen the key from Fat Franny. My bum hurts so much I’m going to have to sleep on my front for a week.

It’s Easter Monday. Nasty Nora and Fat Franny let us join in the Easter Egg hunt in the park. Nelly won a Cadbury’s Easter Egg and she shared it with me. After the hunt, we rolled down the hill – it was great fun. We are off school for one more week. In the morning, we have to do chores but in the afternoons me and Nelly sell lemonade. So far we’ve made five shillings. At the end of the week, we’re going to go to Woolworths to buy sweets – I can’t wait!

I hate Nasty Nora – when she found out we were selling lemonade, she took all our money and told us it was her payment for looking after us all the time. Nelly said that we can make a plan to get it back but I told Nelly that she will know it’s us if we take it. I had a better idea – I put itching powder in Nasty Nora’s bed and when she woke up the next morning she was red and sore all over and scratching like a cat! And the best part? She has no idea who did it! Nelly was worried but I told her she deserved it. That’ll teach Nasty Nora to steal!

Nothing interesting to write about today. After morning inspection, we went to school, did our chores and then played in the den until dark. One good thing that happened was that we had potatoes, meat, vegetables, AND custard for tea!

Baby Carole was adopted this morning. We all waved her off. A man and a lady came to collect her. The lady smelt sweet, like candy floss. I tried to talk to her to tell her that Baby Carole would need an older sister to help take care of her but Fat Franny told me to scoot quick smart. Candy floss lady was wearing a red coat. When I grow up, I’m going to have ten coats in all the colours of the rainbow. Me and Nelly watched them leave from the window. I wonder if Baby Carole will get a bicycle like Nelly did?

Originally from the UK, Karen won the Emirates Airline Festival of Literature Montegrappa Novel Writing Award 2016 with her crime-thriller novel, the bestselling The Good Mother. When she’s not writing novels, Karen is busy bringing up her two young children and running her communication business Travel Ink.

One thought on “Blog Tour Excerpt: The Home”