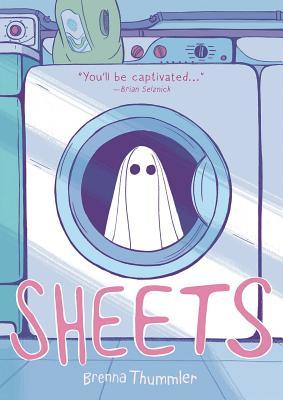 Marjorie Glatt feels like a ghost. A practical thirteen year old in charge of the family laundry business, her daily routine features unforgiving customers, unbearable P.E. classes, and the fastidious Mr. Saubertuck who is committed to destroying everything she’s worked for.

Wendell is a ghost. A boy who lost his life much too young, his daily routine features ineffective death therapy, a sheet-dependent identity, and a dangerous need to seek purpose in the forbidden human world.

When their worlds collide, Marjorie is confronted by unexplainable disasters as Wendell transforms Glatt’s Laundry into his midnight playground, appearing as a mere sheet during the day. While Wendell attempts to create a new afterlife for himself, he unknowingly sabotages the life that Marjorie is struggling to maintain.

Sheets illustrates the determination of a young girl to fight, even when all parts of her world seem to be conspiring against her. It proves that second chances are possible whether life feels over or life is over. But above all, it is a story of the forgiveness and unlikely friendship that can only transpire inside a haunted laundromat.

Marjorie is in charge of her family’s business, a laundromat. She struggles because she had to take over their business when her mother passed away. She doesn’t have friends at school. It gets worse when Mr. Saubertuck starts sabotaging her business so that he can build a resort on their property.

I found this story so sad. It was sad that Marjorie’s mother passed away, and her father didn’t really do anything after because he was so depressed. Marjorie didn’t have time to explore her feelings because she had to look after the family.

Wendell and the land of ghosts were also sad. Wendell is starting to forget his former life.  The ghosts have a whole world, where they float around in sheets. The idea of the land of ghosts in sheets was funny sometimes. They had support groups and jobs. But it was still sad to think that all of those people had died and they were beginning to forget their former lives.

This was an emotional story with a positive ending about the power of friendship and forgiveness.

Have you read Sheets? What did you think of it?