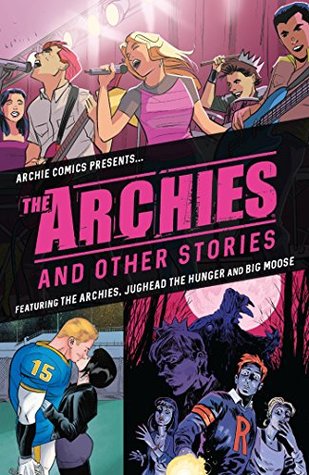 Join in the fun of THE ARCHIES along with BIG MOOSE along with the horrific JUGHEAD: THE HUNGER in this graphic novel collection spotlighting Archie Comics’ hit one-shot series!

THE ARCHIES: Follow Archie’s quest to make his songwriting dreams a reality, and see what happens when the rock ‘n’ roll dream starts affecting his relationships with his closest friends. Join co-writers Alex Segura and Matthew Rosenberg (Marvel’s Kingpin, Rocket Raccoon) and artist Joe Eisma (Morning Glories) for a power-pop one-shot that goes loud on the music, fun and friendship.

BIG MOOSE: Riverdale’s resident jock gets the spotlight in this special one-shot where everything’s Moose! Stories by Sean Ryan, Ryan Cady and Gorf with art by Cory Smith, Thomas Pitilli and Wilfredo Torres!

JUGHEAD THE HUNGER: Jughead Jones has always had an insatiable appetite… but what if his hunger came from a sinister place? When a murderous menace is on the prowl, taking the lives of some of the most well-known and esteemed inhabitants of Riverdale, Jughead and his family’s dark legacy comes to light. Join writer Frank Tieri (Wolverine) and artist Michael Walsh (Secret Avengers) for this horrifying one-shot for TEEN+ readers.

This graphic novel is a collection of three comics from different Archie Comics series.

The story The Archies is about the creation of Archie’s band. Archie agrees to play a gig, before even creating a band, so his friends have to come to his rescue. It is a typical Archie story, where he makes a mistake and then his friends help him figure it out.

The story Big Moose is about the character Moose. He has to manage his busy life of school work, sports, home life, and his relationship with Midge. This story was a series of shorter comics which were like the original Archie comics that I read when I was a kid.

The story Jughead The Hunger was by far the most surprising one! In this story, there is a killer in Riverdale who is murdering various members of the town. The killer ends up being a werewolf, whose family has a legacy of lycanthropy. This story was unlike any Archie story I’ve read before because one of the main characters became a werewolf and a killer.

This is a great collection to read before choosing to start one of these series. I will definitely look for the Jughead series to see what happens next!

Have you read The Archies & Other Stories? What did you think of it?

One thought on “The Archies & Other Stories”