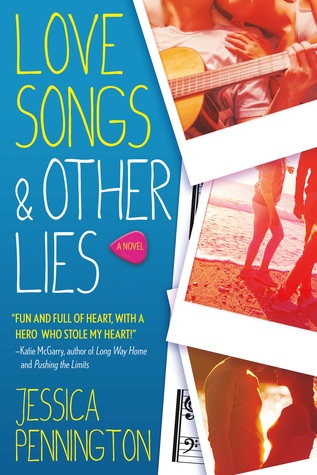 It’s summer romance and second chances, the songs that stay in your head, and the boy you’ll never forget.

Two years after rock-song-worthy heartbreak, Virginia Miller is looking forward to a fun, carefree summer. Her friends just landed a spot on a battling bands reality show, and Vee is joining them for her dream internship on tour. Three months with future rockstars seems like an epic summer plan. Until she learns she’ll also be sharing the bus with Cam. Her first love, and her first heartbreak. Now Vee has more than just cameras to dodge, and Cam’s determination to win her forgiveness is causing TMZ-worthy problems for both of them. With cameras rolling, she’ll have to decide if her favorite breakup anthem deserves a new ending. And if she’s brave enough to expose her own secrets to keep Cam’s under wraps.

I really enjoyed this YA story.

I liked the concept of Virginia traveling around on the tour bus with her friends. This kind of band tour is completely new to me, so I liked learning about it, especially the behind-the-scenes aspects of a reality show. It’s unfortunate for Vee that the bus was completely full of guys. And it’s also unfortunate that her best friend lied to her to get her there.

I liked Virginia too, and it’s too bad that her friends were jerks. I didn’t like Logan. He had an awkward place in the story as Vee’s friend/sometimes fake boyfriend. At first I didn’t like Cam, but he grew on me. Even though he made bad decisions, I don’t think he was a bad guy.

I recommend this story for anyone looking for a light YA romantic read.

One thought on “Review: Love Songs & Other Lies”