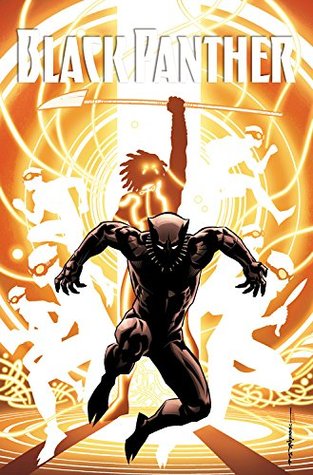 Counting down the final days of the kingdom of Wakanda! As Zenzi and The People poison Wakanda’s citizens against the Black Panther, a cabal of nation-breakers is assembled. And Ayo and Aneka, the Midnight Angels, are courted to raise their land to new glory! His allies dwindling, T’Challa must rely on his elite secret police, the Hatut Zeraze, and fellow Avenger Eden Fesi, a.k.a. Manifold! And with T’Challa’s back truly against the wall, some old friends lend a hand: Luke Cage, Misty Knight and Storm! But Wakanda may be too far gone for this all-new, all-different crew — and there’s one job the Panther must handle alone. Only he can voyage into the Djalia! Getting there is hard enough, but can he even find his sister Shuri inside Wakanda’s collective memory? Collecting BLACK PANTHER (2016) #5-8, plus JUNGLE ACTION #6-7 and bonus content.

I enjoyed this second volume in the new Black Panther series.

This story jumped right into the action, since the characters were introduced in the first volume. T’Challa appears much more conflicted between leading his country and protecting his people. Meanwhile, he needs to try to get his sister back from Wakanda’s collective memory, which is like an in-between world.

The Black Panther has to face all of these challenges, so he brings in some help from other superhero friends. I loved the cameo appearances by other Marvel superheroes. He asks Tony Stark, AKA Iron Man for help. He also brings his friends Storm, Eden Fesi, Luke Cage, and Misty Knight into Wakanda. It was interesting to see him interact with these other familiar characters.

I also enjoyed the two vintage comics at the end of the volume. They show the original comics featuring the Black Panther, so we can see how he has changed and how he has remained the same over the decades. This is a great second volume in the series!