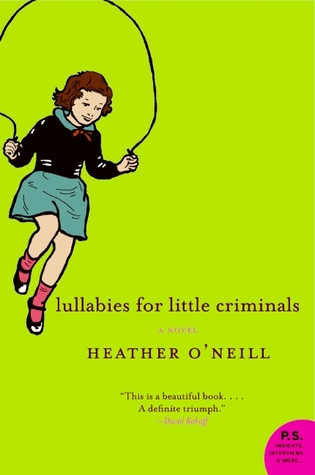 A gritty, heart-wrenching novel about bruised innocence on the city’s feral streets—the remarkable debut of a stunning literary talent

Heather O’Neill dazzles with a first novel of extraordinary prescience and power, a subtly understated yet searingly effective story of a young life on the streets—and the strength, wits, and luck necessary for survival.

At thirteen, Baby vacillates between childhood comforts and adult temptation: still young enough to drag her dolls around in a vinyl suitcase yet old enough to know more than she should about urban cruelties. Motherless, she lives with her father, Jules, who takes better care of his heroin habit than he does of his daughter. Baby’s gift is a genius for spinning stories and for cherishing the small crumbs of happiness that fall into her lap. But her blossoming beauty has captured the attention of a charismatic and dangerous local pimp who runs an army of sad, slavishly devoted girls—a volatile situation even the normally oblivious Jules cannot ignore. And when an escape disguised as betrayal threatens to crush Baby’s spirit, she will ultimately realize that the power of salvation rests in her hands alone.

Since I read about a book a day, I rarely say I can’t finish one. However, I just couldn’t finish this one. I made it through the first third of the novel before I had to stop.

I was confused right at the beginning of the story. Some of the editing gave the sentences two meanings. It starts out with Baby saying “my dad, Jules, and I moved into an apartment” and so I assumed that meant she moved with her dad AND Jules. But Jules is her father’s name. It took about four pages for me to figure that out.

The story was tedious to read. The same things kept happening over and over. Some parts were also hard to read. Young teenagers talked about being paid to have sex with men, and other children were looking for drugs to try. I struggled with both the subject matter and the style.

I’ve heard a lot of people rave about this book, but unfortunately it wasn’t for me.