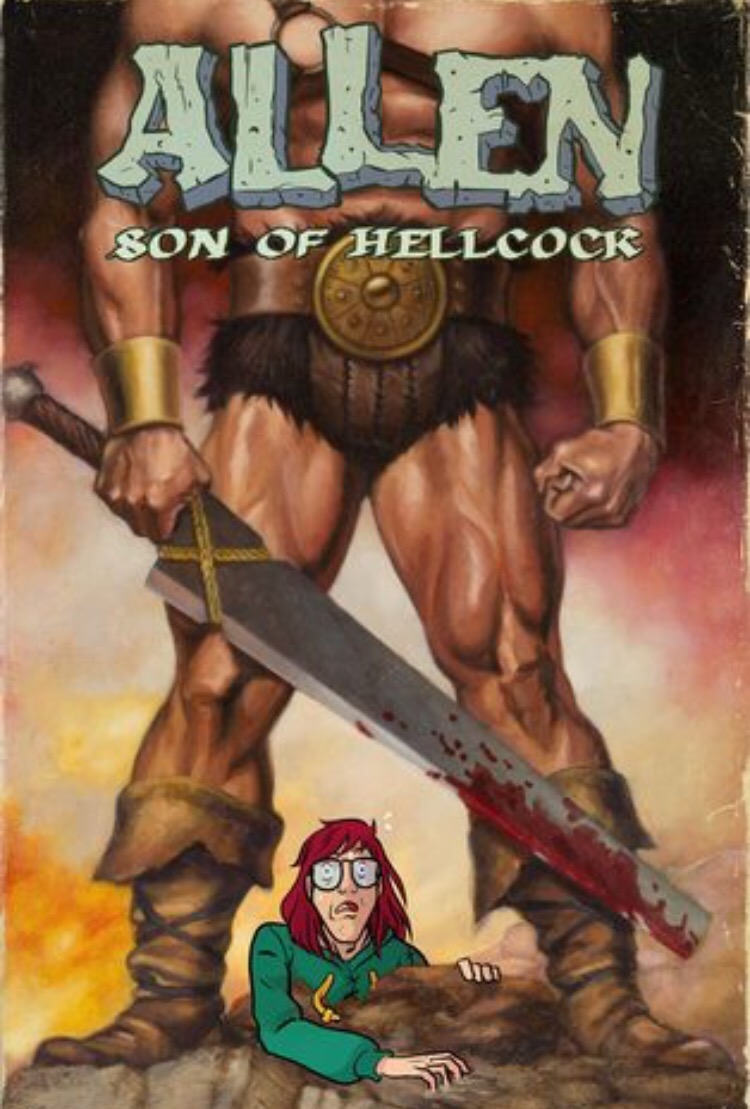 The son of the greatest barbarian who ever lived is thrust into a quest that, frankly, he’d rather sit out.

Long before darkness descended upon the realm, Mungletown was protected by noble heroes led by the great loin-clothed warrior Hellcock. So fearsome was his might that . . . well, actually, a dragon eats him on page nine. But never mind that! Years later he’s still hanging around as a ghost to cajole his disappointment of a son, Allen, into taking up the mantle and becoming a proper heir to the Hellcock legacy. But Allen prefers a simpler life of eating sandwiches, drawing his own pretty terrible comic books, and being afraid to talk to girls. When Kaarl, the son of Hellcock’s retired nemesis Lord Krong, attacks the town to break up the monotony of peacetime, only local rabble-rouser Madeleine stands up to him. In a desperate bid to impress her, Allen decides to get Hellcock’s old band of adventurers back together and take the fight to Kaarl. Without much of a plan or any useful skills, what happens next is quite painful to witness.

From the comedic minds of Will Tracy (The Onion, Last Week Tonight With John Oliver) and Gabe Koplowitz (VICELAND), ALLEN, SON OF HELLCOCK has it all: washed-up sorcerers and swordsmen, terrifying horse-donkeys, sensitive ogres, fashionable elves, ornery minotaur landlords, an exceedingly polite retired despot, a black-hearted but oddly lovable villain, an idealistic young woman who’s the only one with any brains, and a would-be warrior who can’t seem to escape his own hackneyed destiny . . .

I was pleasantly surprised by this book. I laughed out loud many times.

Allen is not the typical son of a hero. He’s nerdy and weak. He’s not like Thor, who is just as strong as his father, and able to complete his father’s tasks. This story takes that typical father-son heroic story and flips it.

There were many strange creatures along the way, that were just so weird and funny. They met horse-donkeys, animals with the head of a horse and body of a donkey. Everyone was freaked out by these creatures, even though they look pretty ordinary. There were also owls wearing hats and three foot tall “giants.”

There was a point when the creators of the book appeared in the story. I love when this meta technique is used, drawing attention to the fact that this is a graphic novel.

There were some graphic parts of the story (i.e. A head being ripped off a body) and lots of sexual innuendo, so this book is for a mature audience.

This was a really funny story. You should read it if you want to read something a little different from the typical heroic graphic novel.