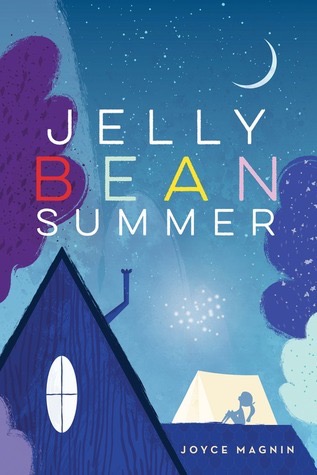 Joyce Anne is an eleven-year-old girl who shares a bedroom with her older sister Elaine and Elaine’s pet guinea pig, Jelly Bean. Her older brother is missing in the Vietnam War. Her missing brother causes a lot of tension in her house. Elaine constantly claims to see UFOs in the sky. One day, Joyce gets sick of hearing about her sister’s UFO sightings and she decides to move to the roof. She brings a tent up along with some books and binoculars to keep an eye on the neighbours. As she watches the other houses, she sees a teenage boy standing on another roof, also looking through binoculars. They write on papers and hold them up to each other to communicate. When Joyce goes over to meet the boy, Brian, she learns that his brother died in the war. His mother also died long ago so he just lives with his father. But his father doesn’t want to take care of him anymore. He thinks Brian would be better off living with his aunt in Arizona. Brian is currently working on a car so that he can drive it to Arizona, but he needs money to finish the job. Joyce has the idea to create a miniature UFO and sell tickets for people to see it. The problem is that Joyce will need her sister’s help to build it. Can they put aside their differences to help the cute boy from down the street?

I liked the way this story demonstrated the effects of the Vietnam war on the families of the soldiers. It changed the way that Brian’s family and Joyce’s family lived. It also gave Joyce and Brian something in common (both having brothers who fought in the war), despite their age difference.

I didn’t feel a strong connection with the characters. They all seemed a little one-dimensional, including Joyce who is the main character and the narrator. She has a one-track mind, and only focuses on helping Brian get his car working.

I also struggled with the title of the book. I don’t think it is descriptive of what actually happens. Jelly Bean, the guinea pig, is only a small part of the story. I think the title could have told more about the plot of the novel.